Former professional footballer Clyde Best has backed a British campaign to recognise another trailblazer in the sport who was blocked by racism from playing for England.

Jack Leslie, who died aged 88 in 1988, was the only black professional footballer in England during his 14 years at Plymouth Argyle — and later worked at West Ham United, where Best became a star.

But when Leslie was chosen to play for England against Ireland in 1925, he was dropped after the selectors realised he was black.

He and Best got to know one another late in his life, when Leslie got a job cleaning football boots at West Ham — the club where Best faced racism as one of the earliest black players in the modern form of the game, from 1968 to 1976.

Now a campaign by Plymouth fans, backed by the club, seeks to raise £100,000 for a statue to honour Mr Leslie.

Best said yesterday that the move was “long overdue”.

He added: “I knew Jack. He spent a lot of time at West Ham. He was there all my time and I’m sure he was there before me.”

Best said he knew of the older player’s career at Plymouth Argyle, but said he had not been aware that his rise up the ranks

had been cut short by the colour of his skin.

Best added: “I knew him from the time he worked at the club. He was a very nice man who just did his job. In those days, you can imagine what it would have been like for him.

“He just went ahead and did what he had to do.”

BBC News reported yesterday that Leslie’s granddaughters said he never expressed bitterness over his denied opportunity, despite a high-flying career that helped Plymouth advance as a club.

A mural at the club’s Home Park pays tribute to him and a boardroom at the stadium was named after Leslie last year.

Simon Hallett, the Plymouth chairman, told the BBC: “Having a statue promoted by our fans and funded by fans is a statement by them that they are joining the fight against racism in football.”

Best backed the statue bid. He said: “He is one of the first ones. If that’s what the fans want, give them that.

“They are the ones that pay for the tickets, so you have to listen to them. Rightly so. It is probably something that’s long overdue.”

• The Jack Leslie campaign, which is endorsed by the player’s family, can be found at jackleslie.co.uk 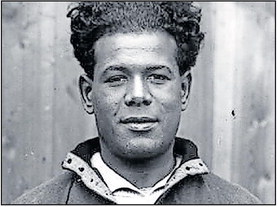 I knew a legend: Clyde Best

Click here to see this page in the eEdition: